In mid-May, Canadian Parliamentarians participated in the 3rd annual Iran Accountability Week. Members of the Conservative, NDP, and Liberal caucuses joined together to “sound the alarm on Iranian domestic repression” through a press conference, statements in the House of Commons and Senate, and a special meeting of the Subcommittee on International Human Rights.

In addition, Ambassador of Religious Freedom Andrew Bennett issued a statement urging Iranian authorities “to release all those who have been imprisoned in Iran for merely practicing their faith,” including Bahá’ís, Christians, Dervishes, and Sunni Muslims.

Finally, in an address to the American Jewish Committee in Washington, DC, Foreign Affairs Minister John Baird continued to express his distrust of Iranian President Hassan Rouhani’s nuclear ambitions: “Kind words, a smile and a charm offensive are not a substitute for real action, nor are they an effective mask to disguise the old hatred. That’s why I’m deeply skeptical about Iran’s intentions.” 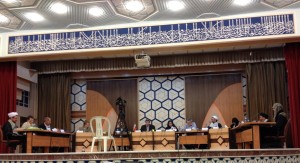 This rhetoric was ringing in my ears as I accompanied a delegation of academics, students, and MCC colleagues to Iran to participate in, among other learning opportunities, the sixth round of dialogue between Shia Muslim and Mennonite Christian scholars.

To be sure, there is also no shortage of distrust toward Western political leaders to be found in Iran. The last two days I spent in Iran were national holidays marking the 25th anniversary of the death of Ayatollah Khomeini, the leader of the 1979 revolution that overthrew the U.S.-supported monarch known as the Shah of Iran. Although the streets of Tehran were empty and the shops of the famous Grand Bazaar were shuttered, I did catch excerpts of some of the speeches by Iranian leaders on local TV.

And in conversations with Iranians it became clear that skepticism toward the West—if not disappointment, frustration, and concern—is based on more than speculation about intentions. The people of Iran have borne the cost not only of foreign meddling in their internal political affairs, but of foreign support for Iraq during a long and devastating war in the 1980s, and now widespread economic and political sanctions imposed by the United Nations.

Beyond political hostilities, however, I think the lack of trust between Iran and countries like Canada is also rooted in ignorance and misunderstanding.

For example, I expect that many Canadians have little awareness of Iranian culture and history—a lack of awareness that can easily lead to a lack of appreciation or respect, and undermine the dignity of Iranians. 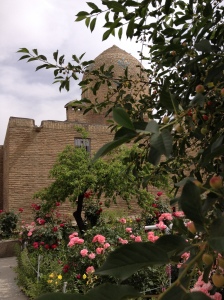 During a trip to Hamedan, one of the oldest cities in the world, I saw inscriptions that date back to the height of the Persian Empire 2,500 years ago. I visited the tomb of Esther and Mordechai, an important pilgrimage site for Jews in Iran. And I toured the mausoleum of Avicenna, one of the greatest and most influential Islamic scholars at the turn of the first millennium.

Attending a conference in the city of Qom on a twentieth century Iranian philosopher, Murtada Mutahhari, and meeting with university professors in Tehran, it was clear that the legacy of Avicenna lives on. Iranians not only have a passion for philosophical and theological debates, but an impressive education system to nurture the curiosity and skills needed for these debates.

Beyond displaying the influence of a rich intellectual tradition, the dialogue between Shia and Mennonite scholars highlighted a broader interest in engagement in at least some segments of Iranian society. Instead of isolation and hostility, I observed a spirit of openness and hospitality.

As anyone who observed the exchange of thoughts between Shia and Mennonite scholars will attest, dialogue does not mean we leave our principles at the door before we sit down at the table together. Indeed, instead of watering down our convictions, dialogue demands that we foreground the things that are most important to us. 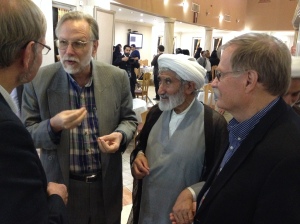 Dialogue forces us to explain what it is we believe, why we believe it, and to respond to questions about those beliefs.

Dialogue, like advocacy, is a form of witness. It can make us uncomfortable. It can make us vulnerable. Perhaps this is why it can also make us more confident and assured in our relationships.

In any case, if trust is the product of dialogue rather than a prerequisite for it, then I think we have reason to be concerned about the current posture of the Canadian government toward Iran. As MCC has noted in the past, cutting off diplomatic ties, issuing strongly worded statements, and seeking to impose accountability from a distance appears to be undermining the prospects for justice and peace.

Beyond supporting rare opportunities for formal dialogue, the challenge that remains for us all is to find creative ways of establishing trust between peoples divided by culture, religion, and politics.